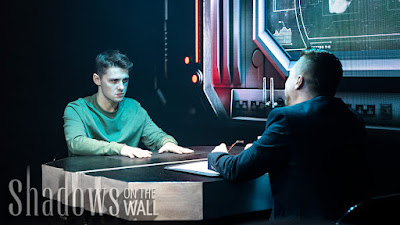 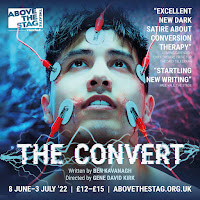 This absolute stunner of a play grabs hold and refuses to let up, as playwright Ben Kavanagh grapples with present-day issues and attitudes in a vaguely futuristic setting. The central topic here is gay conversion therapy, although the plot deftly avoids the obvious. Surreal touches take the audience under the surface to reveal deeper thoughts and feelings, embracing contradictions and ambiguities that add a provocative kick.

The story is set after an overthrow of current Western culture, taken over by fundamentalists who have outlawed homosexuality. Arrested for being gay, Alix (Nick Mower) finds himself in a shadowy rehab centre. Unable to tell day from
night, he's confused about the passage of time, while the Arbiter (Kavanagh) insists that Alix only give pre-approved answers to any questions before applying violent "corrections". Alix's cellmate is Marcus (Sam Goodchild), who has accepted this situation and hopes to be returned to society as a straight man who will get married and have children. The only alternative is to be sent to some mythical other place, where gay men are hidden from society.

Skilfully using light, sound and video screens, the set is vividly evocative from the start, with its industrial screens, piercing illumination and rolling smoke. It looks like a cross between a spaceship and a bomb shelter, which adds to Alix's general disorientation. Beds are like alien examination tables, while the interrogation desk holds its own secrets. Meanwhile, the performances lift this show far above expectations, anchored by a raw, yearning turn from Mower in his professional debut.

Mower makes Alix instantly sympathetic, never giving into the cruelty that's dealt to him. In blackout moments, makeup is applied to reveal the brutal injuries inflicted during this experience, and Mower conveys Alix's quiet resilience even when this gets very nasty indeed. His banter with Kavanagh's coldly acerbic Arbiter is strikingly well-played, as are the much more tender and open moments between Alix and Goodchild's intriguingly nuanced Marcus.

While the key target is gay conversion, there are much deeper things at work as this play explores how the three characters identify themselves. These thoughtful ideas are subtly played by the cast to add emotional impact. So in the final act, as the story takes a series of rather mind-spinning turns, it's this internalised journey that holds us tightly, accompanied by the haunting words of Barbra Streisand's Happy Days Are Here Again. 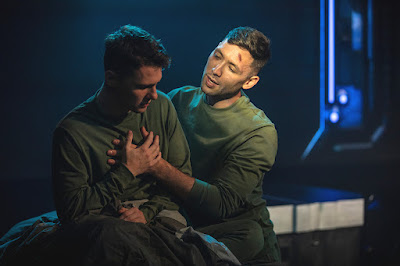 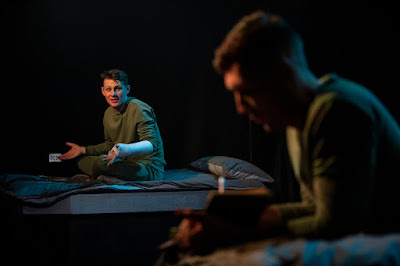 For information, visit ABOVE THE STAG >