Stage: Laughing and gasping at the same time 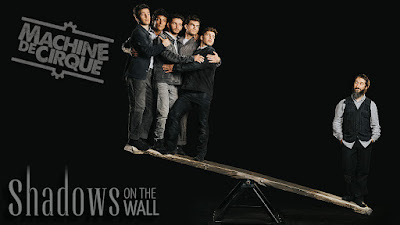 Based in Quebec, this cheeky troupe of circus artists pushes each of their skill sets far beyond expectations. Their mastery of both their wildly acrobatic bodies and a staggering variety of objects is frankly jaw-dropping. So watching this show gives us the feeling that these are the best in the world at what they do, continually shifting things up in ways that are as flat-out hilarious as they are physically dazzling. Indeed, we're often laughing and gasping at the same time.

There's an overarching story about the construction of a nutty energy machine, but that's just a framework on which to hang both the physicality of these five young men and the outrageously inventive music performed by Frédéric Lebrasseur using drums, guitars, a massive panpipe and anything else he can find. All of them also use their voices, with lots of amusing gibberish and the occasional intelligible word. And even if the stage is constantly in a flurry of activity, the show is so cleverly constructed that there's never a question about what to look at.

Each section is performed with breathtaking skill and a charismatic sense of humour, as each artist creates a distinct character, alternating moments in the spotlight or playing the butt of the joke. A trapeze act gleefully flips the rules on how the apparatus works, while a staggering display of bicycle trickery seems to defy gravity. The see-saw is put to use in a range of inventive ways, from playing with balance to flinging acrobats a bit too high into the sky. And the insanely energetic juggling section gets so riotously out of control that you want to rewind and watch it again in slow motion.

There are also a couple of quieter comical set-pieces, including a pantomime date night with an audience member that's packed with hysterical little gags. Then the performers strip naked and somehow manage to cover their modesty with flinging towels while taunting each other with increasingly daring physicality, leaving us in painful fits of laughter. It may sound rude, but the children in the audience were of course giggling the loudest.

This must-see show is expertly put together to pull the us in with outrageous spectacle, snappy humour and an unexpected wave of warm emotion. It's so relentlessly charming that we never want it to end, especially since we begin to feel like these smiley and extraordinarily fit young men are like family. And with the larger company travelling the world with several productions at the moment, watching this one will turn us into stalkers hoping to see them any chance we get. 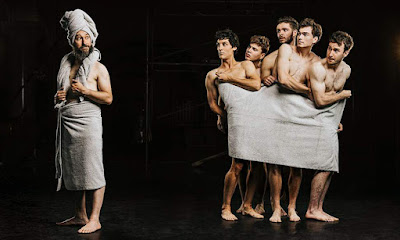