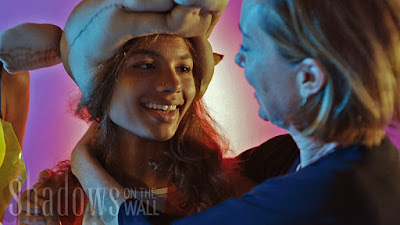 Most films I've seen this week have been previews for BFI Flare, the festival that kicks off on Thursday night, so I'll be writing more about them here over the next couple of weeks. Otherwise, I've seen a few movies that will work their way into cinemas over the next weeks and months. These include Madeline's Madeline, a resolutely experimental film that dances around mental illness but features a fascinating introduction to young actress Helena Howard (above with the always superb Molly Parker). Jordan Peele follows up his groundbreaking hit Get Out with Us, an even more audacious riff on the horror genre. It's freaky and often darkly unnerving, and has something powerful going on under the surface. Anna Paquin and Holliday Grainger star in Tell It to the Bees, a warm, slightly gooey forbidden romance set in 1950s Scotland. From Argentina, A Trip to the Moon is a quirky coming-of-age film with a terrific set-up, although it struggles to deliver on its promise. And I also caught up with this one...

This is one of those macho meathead movies in which beefy men go by nicknames like Redfly, Pope, Ironhead and Catfish. The plot sees Pope (Isaac) recruiting four ex-military buddies (Affleck, Hunnam, Hedlund and Pascal) for a mercenary mission to steal hundreds of millions in drug money from a kingpin in the dense jungle where Bolivia, Brazil and Peru meet. With this basic set-up and a very limited vocabulary, it feels like an unused script for Expendables 4, but the adept cast does what it can, breathing charm and camaraderie into the blunt roles. Isaac is always watchable, even in a vacuous part like this, and Affleck is charismatic enough to make his world-weary soldier vaguely intriguing, but Arjona is wasted in the requisite thankless female role. As former special ops soldiers, none of them hesitates before killing anyone who looks even remotely shifty, taking a scorched-earth approach to their work then insisting that no man is left behind, as if that makes them humanitarians. Of course, the mission doesn't go as planned, so this feels like two separate movies: an hour of heist and an hour of messy clean-up as greed literally weighs them down. It's a mix of survival thriller and action violence as these tough guys are pushed to the breaking point. Like their murderous impulses, this undermines the film's pushy moral sermon and leaves the biggest action sequences feeling rather dull (not helped by a trite Disasterpeace score). But the real problem is the clumsy plot, which gets increasingly far-fetched as these true blue heroes abandon their principles and make far too many boneheaded decisions. Frankly it's impossible to see JC Chandor's usually smart touch anywhere.

BFI Flare: London LGBTQ+ Film Festival runs on the Southbank until the end of the month, and I'll be covering it here with regular updates and reviews. In addition to rather a lot of festival films, I'll also be catching regular releases including Tim Burton's Dumbo, Judi Dench in Red Joan, Charlize Theron in Long Shot, Mel Gibson in Dragged Across Concrete and the animated adventure Wonder Park.
Posted by Rich Cline at 21:25