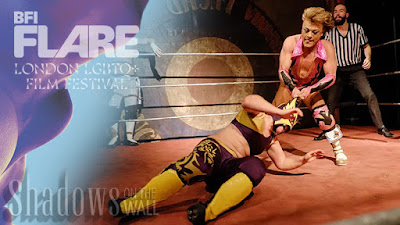 The 33rd BFI Flare is in its stride now, and I had my busiest day of the festival today (four films!). I always enjoy chatting with filmmakers during Flare, as they hang out in the same spaces as the press every day - something that happens in very few festivals. Sometimes this is useful for a proper interview for publication, but it's also just nice to chat about movies with them. And then there are times when you try to find a quiet corner so you can write a draft review on your phone of the film you've just seen. Both of those happened today! Here are some more highlights...

Cassandro the Exotico!
dir-scr Marie Losier; with Saul Armendariz, Hijo Del Santo 18/Fr ****
One of the most colourful Lucha Libre wrestlers, which is saying a lot, Cassandro (real name: Saul Armendariz) offers revealing insights in this lyrical, entertaining documentary. This Texas-born 48-year-old is a thoroughly engaging figure, and filmmaker Marie Losier follows him intimately, creating a gently observant portrait of an outrageous man. While most Lucha Libre wrestlers wager their masks in matches, Cassandro bets his enormously fluffed-up hair. Of course, audiences adore him.

Last Ferry
dir Jaki Bradley; with Ramon O Torres, Sheldon Best 19/US ***
This low-key mystery thriller stirs up some decent atmosphere as it focuses on a group of secretive men at a beach  on Fire Island. Director Jaki Bradley and actor-writer Ramon Torres create cleverly enigmatic characters, all of whom have something to hide. But they withhold far too much from the audience, leaving us on the outside looking in. And it's frustrating that we can't get more involved in anything that's happening on-screen.

Men of Hard Skin [Hombres de Piel Dura]
dir-scr Jose Celestino Campusano; with Wall Javier, German Tarantino 19/Arg ***.
Taking an offbeat, almost unnervingly matter-of-fact approach to a seriously dark theme, this Argentine drama holds its focus tightly on the characters and never judges them. Which is simply astonishing. Filmmaker Jose Celestino Campusano gets under the skin with a complex, nuanced look into the lives of victims and perpetrators of child abuse. Avoiding sensationalism may make the film feel muted, but it has a lot to say, and its effects are lingering.

Making Montgomery Clift
dir-scr-prd Robert Clift, Hillary Demmon; with Robert Clift, Montgomery Clift 18/US ****
Instead of telling the story of this iconic actor, this documentary sets out to explore his legacy, specifically his image as a self-destructive, closeted gay figure. But stories from people who knew him tell a very different story, so his nephew Robert sets out to sort fact from fiction as he co-directs and narrates this sensitive, observant film. Frankly, it's refreshing to see a movie that doesn't try to find a bombshell, but rather defuses them to say something more important.

Rafiki
dir Wanuri Kahiu; with Samantha Mugatsia, Sheila Munyiva 18/Ken ****.
Small and perfectly formed, this subtle but hugely involving romance takes on a powerfully taboo topic in its homeland of Kenya: same-sex romance. Without either preaching or pushing the premise too far, filmmaker Wanuri Kahiu follows two likeable young women who simply feel drawn to each other. Reactions from the people around them are surprising and darkly provocative, making this quiet little movie deeply important... FULL REVIEW >

Despite a ban dating back to WWII, the military is the largest employer of transgender people in the US. More than 15,000 trans men and women serve in the armed forces in a variety of key roles. For these soldiers, the biggest challenges have come from military policy. Beautifully edited with clever graphics and animation and a sensitive tone, the film centres on the trans group Sparta and its campaign to allow trans men and women to serve in the military without prejudice. The chronology covers the run-up to the historic ban being rescinded in 2016, followed by Trump's about-face to reinstate it a year later against the advise of his generals. It's seriously moving to hear these brave young people speak about being surprised to be treated as normal and valued by leaders in the Pentagon. And then they are undermined, belittled and bullied in their units. And by their commander-in-chief. Each of their stories is compelling and powerful, highlighting both the vital roles trans soldiers and officers play on the field and the journeys they have taken to get to this point. The filmmakers also include their parents, friends, spouses and children, which adds both lightness and warmth to the thematic urgency. By remaining so personal, the documentary simply lays waste to almost any kind of criticism someone could throw at this situation. It also quietly comments on the ugly prejudice, pain and violence many trans people face on a daily basis. The simple truth is that everyone should be treated fairly, no matter who you are. And frankly, these are just the kind of sensitive, caring, thoughtful soldiers we need to have out there fighting in the name of our countries.