Flare: Put on a show 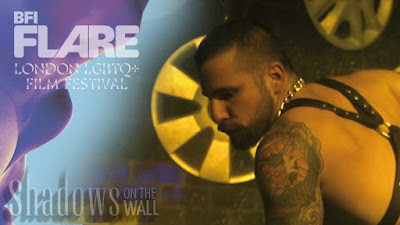 The 33rd BFI Flare continues this weekend, as a million people marched just across the river Saturday trying to stop the chaos of Brexit. Screenings have been busy, packed with a lively audience looking for movies outside the mainstream that deal with more complex issues of identity and humanity. I particularly enjoy the chance to see short films on a big screen. These are busy days for me: I also have my regular weekly releases to watch, so I'll see both Dumbo and Wonder Park on Sunday, then walk back across the river to BFI Southbank for more offbeat Flare fun. Here are some more highlights...

Tell It to the Bees
dir Annabel Jankel; with Anna Paquin, Holliday Grainger 18/UK 1h46 **.
Told with perhaps too much warmth, this 1950s romance is sharply written, acted and production designed to create a specific period atmosphere. It's austere and fairly bursting with secret feelings as two women fall in love in a small town. The themes are nicely handled with sensitivity and a light directorial touch, but the melodrama begins to feel somewhat sticky in the final act, pushing the characters in arch directions. And a magical realist element never quite gels.

Socrates
dir Alex Moratto; with Christian Malheiros 18/Br ****
Produced by a workshop of young people aged 16 to 20, this Brazilian drama takes a bracingly realistic approach to its story of a teen living, in more ways than one, on the margins of society. Addressing economic issues, religion and sexuality, the film never tries to preach, instead offering an open-handed, humane approach that seeks compassion and hope in a situation that is increasingly desperate. It's a remarkable little film, beautifully shot and edited, and deeply moving... FULL REVIEW >

The Heiresses [Las Herederas]
dir-scr Marcelo Martinessi; with Ana Brun, Margarita Irun 18/Par ***.
A startlingly introspective filmmaking style sets this film apart from the usual self-discovery drama, as it allows the audience to simply take a journey with the central character without ever trying to explain anything. This can sometimes make the film feel rather vague, as key events and relationships are left to the imagination, but it also draws us in to properly feel the weight of what happens... FULL REVIEW >

With its straightforward, informative approach, this engaging documentary tells an important story that's gripping and powerfully moving. There's a wealth of wonderful archive footage and cleverly integrated snapshots, and the film hinges around firsthand interviews, each person recounting a resonant personal story about how they dealt with harsh prejudice by finding like-minded friends and forming a close-knit family. Forced off his school swim team because he was gay, Charlie joined the West Hollywood Aquatic Club to find a place where he wasn't the "other". Hs story is echoed by a range of men and women who found a place where they could participate in their sport while being themselves. Many of these are older athletes who joined the club as it was founded in 1982, when mainstream teams refused to see gay people as capable of competing. Their stories include bullying, abuse, being fired and sidelined, but as a team of close friends they competed in the first Gay Games in San Francisco, then establishing an international swimming championship with a colourful queer flavour. And the way their team triumphed in the Masters is inspiring, breaking down discrimination and setting world records. And by 1994, the Gay Games were actually bigger than the Olympics. "I didn't know it at the time," one says. "But everything we did was making history." This beautiful film is brisk and full of terrific anecdotes, as these men and women recount their world-class achievements in the swimming pools, happy to refute those who doubted them and to crush ignorance about HIV even as Aids took 38 teammates' lives. Today they remain at the forefront of the fight against discrimination in competitive sport. And yes, the team welcomes its straight swimmers too.