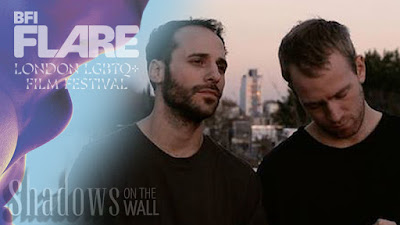 The British Film Institute's 33rd Flare: London LGBTQ+ Film Festival is just past its halfway point, and as always I'm enjoying the mix of provocative movies and great conversations with filmmakers, programmers and other journalists. This is a seriously social festival! And the quality of the films, many of which are difficult to find on a big screen, is very high. Meanwhile, I'm also watching the weekly theatrical releases as they are screened to the press - so the usual Critical Week section is below these Flare highlights...

The Blond One [Un Rubio]
dir-scr Marco Berger; with Gaston Re, Alfonso Baron 19/Arg ****.
As with Marco Berger's other films, this drama captures an easy masculinity that blurs lines of sexuality as a group of fit young men circle around each other. The film is quiet and observational, telling its story in offhanded moments rather than big plot points. It's a strikingly involving, moving exploration of the nature of relationships, transcending the gay genre to explore both deeper human emotions and larger societal issues.

Papi Chulo
dir-scr John Butler; with Matt Bomer, Alejandro Patino 18/US ***.
Irish filmmaker John Butler traces an offbeat friendship in this engaging comedy-drama, which takes a turn that adds a complex exploration of a deep theme. It's a charming story with intriguing characters who interact in honest, messy ways. So while the events in the movie sometimes tip over the top, the story and characters remain easy to identify with... FULL REVIEW >

Tucked
dir-scr Jamie Patterson; with Derren Nesbitt, Jordan Stephens 18/UK ****
Warm and moody, this British drama has an earthy honesty to it that's instantly engaging. It's the story of an offbeat, unlikely friendship, but filmmaker Jamie Patterson resists the usual cheap humour or sentimentality. Instead, each belly laugh is tinged with prickly emotion. And it's remarkable that the film maintains a sense of cheeky optimism even in the story's intensely moving darker moments. Packed with surprises, it's well worth seeking out... FULL REVIEW >

Nevrland
dir-scr Gregor Schmidinger; with Simon Fruhwirth, Paul Forman 19/Aut ****
First-time Austrian filmmaker Gregor Schmidinger demonstrates his love of film history with a psychological thriller that stylistically echoes masters from Cocteau to Kubrick to Noe. Digging deeply into the mental state of the protagonist, this bold and involving film can't help but unnerve the audience as it drags us down a psychedelic rabbit hole that involves suppressed sexuality, a nervous disposition and serious daddy issues.

There were a pair of big screenings of animated movies, starting with Disney's live-action revamp of the classic Dumbo, a lively, engaging film that maintains some of Tim Burton's quirky sensibilities. It was also my first visit to the newly revamped Odeon Leicester Square, London's largest cinema which is now full of comfy recliners. British voice cast members Joe Sugg and Caspar Lee introduced the screening of Wonder Park, a frantic adventure with a terrific premise but little in the way of story, pace or message. And Mel Gibson and Vince Vaughn star in Dragged Across Concrete, the latest genre-buster from S Craig Zahler, which is sharply well made, entertaining and jaw-droppingly nasty, but about twice as long as it needed to be.