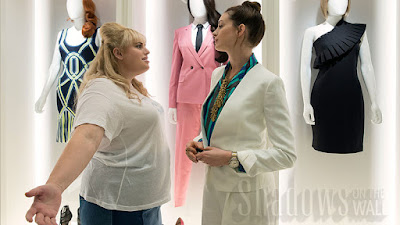 With another long weekend, it's been a shorter than usual week of screenings. But I still kept pretty busy. The biggest release screened to the press, barely before it opened, was The Hustle, a remake of Dirty Rotten Scoundrels starring Anne Hathaway and Rebel Wilson. As a comedy it's rather weak, but has some funny moments all the way through. There were also two British period biopics. Tolkien is an impeccably produced look at the early life of JRR Tolkien (Nicholas Hoult), although it's a bit dry since it takes place before he wrote anything. The Professor and the Madman follows the tenacious work of James Murray (Mel Gibson) to define the English language and produce the first Oxford English Dictionary, with the help of an in-patient at Broodmoor asylum (Sean Penn). Despite the troubled production, it's a fascinating story, strikingly well acted.

Further afield we had the moving, dark British indie drama Last Summer, about young teens in small-town Wales dealing with a wrenching community crisis. And the even darker American indie drama Just Say Goodbye takes on teen suicide with a perhaps too-provocative story about friendship and parenthood. We also caught the superb documentary XY Chelsea, which closely follows whistleblower Chelsea Manning between two incarcerations. It's involving and even inspiring, taking on those who label her a traitor. And since it's finally out for streaming/etc in the UK, here's a longer take on this doc I saw a few weeks back...

Michael Moore was one of the only pundits who predicted the Trump presidency. So this long but watchable and important doc opens with the massive upset of election night 2016, from Clinton supporters' pre-voting revelry turning into gloom to the shocked faces of Team Trump, which clearly didn't expect to win. From here, Moore spins back to look at how Trump accidentally got into the race while trying to increase his profile in contract negotiations with NBC. His racist comments backfired (NBC fired him), but he touched a nerve with a segment of the American public. Masterfully manipulating the media, which was making a fortune from covering his antics, Trump had a long history with Russian mobsters and the media leaders taken down for abusing women. Moore also documents his overt racism and misogyny over many decades, all of which was public knowledge. Similarly, his treasonous behaviour since taking office has also been out in the open.

As usual, Moore connects this to his hometown of Flint, Michigan, where Governor Rick Snyder (a Trump buddy) declared a fake emergency to essentially privatise the poor, black city, callously poisoning it then covering up the escalating disaster. This takes up a good chunk of the film, and rightly so. Back to the main topic, Moore's dissection of the US electorate is fascinating: the truth is that liberal '60s values reflect the average American today; the Republicans have only won the popular vote in one presidential election in the last 30 years ("You can't call it a democracy if the person who wins the most votes doesn't win"). Moore also covers the fraud among the Democrats, such as how anyone who breaks from the centrist line is suppressed (as was Bernie Sanders), and how in many ways Obama paved the way for Trump. So it was no wonder people were willing to break the system with a protest vote.

Finally, Moore dives into gun control in the wake of the Parkland shootings an teens who refused to sit quietly and accept "thoughts and prayers". The salient point here is that candidates are representing their donors, not the voters. And Moore's most powerful message is that we need to ignore attempts to divide us against each other, rise up and create the government we deserve. History tells us that the US is becoming less democratic and more despotic by the day. So this film's carefully documented conclusions should chill us to the bone.

This coming week, we'll be watching Keanu Reeves in John Wick Chapter 3: Parabellum, Julianne Moore in Gloria Bell and the documentaries Apollo 11, General Magic, The Lavender Scare and Nomad. Plus a couple of stage shows, just for a change of scenery.
Posted by Rich Cline at 20:22