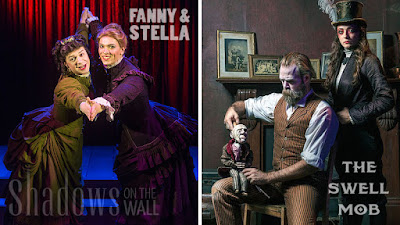 Originally staged in 2015 at Above the Stag's previous venue, this musical gets a welcome revival on a bigger stage. Based on real events, it's a sharply well-written exploration of gender and equality set in 1870 London. Writer Glenn Chandler sets out the story as a musical hall variety show, using comedy and witty songs to recount a series of events involving cross-dressing performers Frederick Park and Ernest Boulton (Tobias Charles and Kieran Parrott). Their alter egos Fanny and Stella hilariously re-enact their story as entertainers on The Strand who cavort around town with their wealthy benefactors. They get in trouble with the law for leaving the theatre in drag, but were never convicted of sodomy. The show recounts their relationships with various men, including Lord Arthur Clinton (Christian Andrews), Louis Charles Hurt (Tom Mann) and American diplomat John Safford Fiske (Blair Robertson).

All of this is played with a cheeky sense of humour on a vaudeville stage, as the actors continually torment the theatre manager Grimes (Mark Pearce) by demanding random personality traits and accents in the side roles he's playing. Each of the six actors plays multiple roles as the story unfolds, bringing a lively sense of raucous energy to each scene. And Chandler keeps the narrative moving briskly along, packing in fascinating real-life details along with the amusing musical numbers, which are infused with eyebrow-raising innuendo. The staging is superb, with subtle set changes that make the most of the witty costumes and the side entrances, which are through closets.


Through all of this, the uniformly excellent cast layers the general silliness with subtle but powerful emotional resonance that extends to some knowing thematic commentary about how long it has taken society to grapple with the issue of human sexuality. Park and Boulton's scandalous trial predated Oscar Wilde's by 25 years, a full century before Stonewall. Frankly, this is an unmissable show. And it would easily work on an even bigger stage.

NOTE: I also reviewed Above the Stag's staging of Fanny & Stella in May 2015.

A hit on the Edinburgh Fringe, this immersive theatre experience takes audiences back to a swirly, surreal version of 1830s Britain. The audience and the actors mix together in a wildly ornate pub, drinking bathtub gin and whispering secrets as a preacher orates in the corner and a dog sleeps through the ruckus on a sofa. It's a ribald evening full of activities, including dance, puppetry and cabaret. A croupier encourages me to place a bet on a bare-knuckle fight held in the basement. The match is electrically well-choreographed and thrilling (alas, his betting tip was off). In a back room, a shady lady leads us in a seance to figure out how to escape from this lurid place. It has something to do with the lowlands and Layla, a woman who seems to be everywhere I turn, telling me crazy things. A lonely man with a bleached-white face is lurking as well, and no one seems to be able to see him. Later someone gets shot. There are boisterous songs, and a climactic moment of soul-sucking horror.

The cast is flat-out excellent, bringing earthy physicality and vivid personality to each role, interacting easily with the audience. Although what all of this means is somewhat unclear. This is one of those events at which the more you get involved, the more your own narrative begins to take shape. At the centre of the performance is a supernatural mystery, so all of the instructions, songs and dramas work together to create both atmosphere and a story.

It's certainly a vivid experience, made even more fun by the fact that they encourage you to dress in costume to make it even more difficult to tell who's part of the show and who's in the audience. But then, everyone's part of this show. And it's a lot of lively fun. It's also the kind of event you could return to several times and find a new story each time. But be warned: if you don't work at it, the plot is elusive, leaving lots of atmosphere but little that grabs hold.