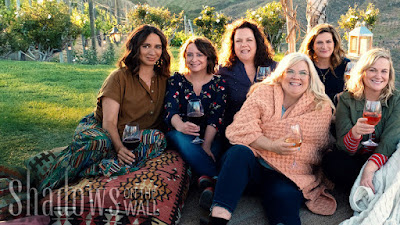 Here are shorter reviews of three films I caught online over the past few days...

Amy Poehler gathers her buddies together for this comedy about a group of six women who travel to Napa Valley to celebrate a 50th birthday. Friends for more than two decades, they rent a big house with bad wifi from a manly landlady (Fey) and follow an elaborate schedule planned by Abby (Poehler). The house comes with a sensitive chef/guide (Schwartzman), who adds some welcome texture to the nuttiness, as does the fabulous Cherry Jones as a visiting fortune-teller. She introduces the main plot point by encouraging them to deal with the secrets between them. And of course each of them has a big secret.

The dialog feels realistic and snappy, but lacks edge or insight, opting for gently observational smiles rather than outright laughter. Plus a lot of mugging along with guilty-pleasure pop songs. Improvisational moments add some spark, mainly thanks to shameless scene-stealers Rudolph and Fey, although each of these gifted hams gleefully takes the spotlight. Some of the dialog riffs are hilarious, such as when they talk about their love of Prince or when they cross a group of Millennials in an art gallery. Other things fall flat, like listing the prescription drugs they're on, worried they might interact with molly (as if litres of wine weren't enough). Speaking of wine, much of the humour centres on wildly drunken antics that begin to feel a little lazy, although the inebriated confessions lead into more intriguing angles exploring how avoiding the truth has held these women together all these years. And maybe being honest will make them even closer. So when they begin to admit that their lives aren't as perfect as they pretend they are, the film finds some proper resonance. It's all a bit mushy, but amiable enough to pass the time.

China's biggest-yet blockbuster is a big, busy movie that simply refuses to settle down into something engaging. But its ticking-timebomb plot holds the interest. With the sun dying, the world is engulfed with floods, fires, droughts, storms and mass  extinctions. So humans band together to move the earth into another solar system, a journey that will take 2,500 years as giant engines propel the planet like a ship, while humans live in giant underground cities. Now 17 years later, teens Qi and Duoduo (Qu and Jaho) skip school and steal thermal suits so they can go to the icy surface. But Jupiter's gravitational pull is too strong, and Earth is in danger of colliding with it. With the engines failing, mankind's survival depends on Qi and Duoduo and a rag-tag group, while Qi's father Peiqiang (Jing) and his Russian cohort Makalov (Sharogradskiy) try to help from the advance navigation ship.

The plot is fairly simplistic, but it's overcomplicated with extra characters and nonstop action chaos. A variety of cool settings are rendered with with elaborate sets and digital effects. And the pacing is relentless, zipping from one cataclysmic set-piece to the next on a scale that might make Roland Emmerich envious. Even if the direction and editing are a mess, the driving energy that holds the interest. And there are quite a few outrageously emotional and heroic moments, plus some solid humour, such as when one frustrated man empties his gun at Jupiter. Or when a group of teens figures out how to save the world with science! It's a shame the film isn't more coherent, because it's big idea is intriguing (it's based on a novel by Cixin Liu). Perhaps having one or two writers, instead of the eight who are credited, might have given the film more focus.

Silicon Valley is apparently full of stories of people inventing the right thing at the wrong time, paving the way for future technology. This pacey documentary traces the fortunes of the team behind General Magic, the most important company that nobody's ever heard of. Inspired by the idea of inventing a new future, Marc Porat imagined the ideal tech beyond the personal computer and designed what we know now as the smartphone in 1989, before mobile phones or internet existed. His team set out to create a tiny device with personal value like jewellery, indispensable, much more than either phone or computer. The staff was the cream of the crop, a spin-off of Apple with a rock star development team. But the public wasn't ready for this yet, and without mass interest, the company failed. Team members who knew this would still be the future went off to create things like eBay and LinkedIn, and years later later the iPod, iPhone and Android.

The film combines new interviews with archival footage, home video and news clips that remind just how much technology has changed since 1990. It's fascinating to watch these young people dream big, coming up with ideas that were wild back then but are everyday now. And to see them develop the hardware to make it work is astonishing, especially as they are creating objects from the ground up. This is a story of unfettered idealism, working to better the world rather than to make a lot of money. It's a vivid depiction of how failure is actually the beginning, not the end. This company was so far ahead of its time that it collapsed, and yet it still changed the lives of literally billions of people.
10.May.19