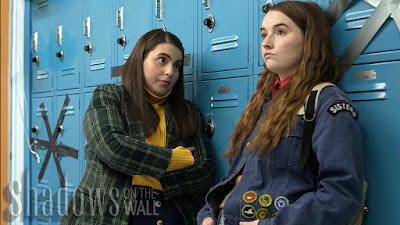 Amid sunny weather in London, while many critics decamp to Cannes for 10 days of frantic festival action, there has been the usual eclectic collection of press screenings. Olivia Wilde steps behind the camera to direct the hugely entertaining teen comedy Booksmart, as raucous as any high school comedy and comes from a refreshingly female perspective. For contrast, Keanu Reeves is back in killing mode for John Wick Chapter 3: Parabellum, which starts off with a series of breathtakingly inventive action sequences before settling in for a relatively rote final act.

The week's indie was Funny Story, a comedy with a very dark undercurrent, beautifully played and bravely written. The foreign film was Portugal's frothy ambrosia Diamantino, a surreal and pointed but surprisingly sweet satire of politics and celebrity culture. And there were three docs: Apollo 11 is a gripping archival film with no present-day material, telling the story of the first man on the moon with pristine film footage and a strikingly intimate perspective. From the brilliant mind of Werner Herzog comes Nomad: In the Footsteps of Bruce Chatwin, which cleverly traces the life of the late writer on an unusual trek through history and geography. And the finely assembled The Lavender Scare recounts a little-known spin-off of the McCarthy hearings, as government workers were hunted down and ruined for being gay from the early 1950s until the law was repealed in the 1990s.

I have two more screenings before I leave London for a couple of weeks: Will Smith in Disney's live-action Aladdin remake and the animated sequel The Secret Life of Pets 2. There may be some films I can catch up with while I'm in the US, not to mention whatever might be on the plane. I'll be updating the blog along the way...
Posted by Rich Cline at 15:49