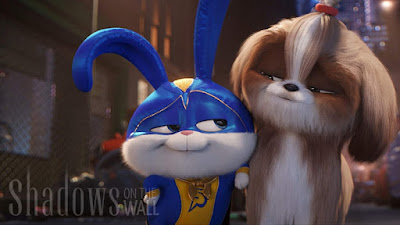 I caught up with the month's two big kids' movies this past week, before leaving London. The Secret Life of Pets 2 is as frantic as the first film, if not more so with its three parallel plot strands. So it never settles down long enough to make the characters very endearing. But it is funny. And Guy Ritchie's live-action Aladdin remake is a surprisingly childish movie - goofy and energetic. But it's also quite enjoyably camp, with a sweet and pointed romance at the centre. And Will Smith puts his own distinctive spin on the Genie, thankfully.

Haven't managed to catch any other films, but I did watch lots of TV on the long flight, including the final episode of Game of Thrones (it was fine, but not the shocking spectacle the series deserved) and a proper binge of The OA (super-addictive, and I'm still a season behind).

I'm travelling west for the next couple of weeks, visiting family in Los Angeles and friends in Maui - not on glamorous movie business, but I hope to catch up with a few films that are opening while I'm out there, starting with Joanna Hogg's The Souvenir, James Gunn's Brightburn and the Elton John biopic Rocketman, which screened to press in London just after I flew out. Although I have other things on my mind aside from movies, of course...
Posted by Rich Cline at 23:20