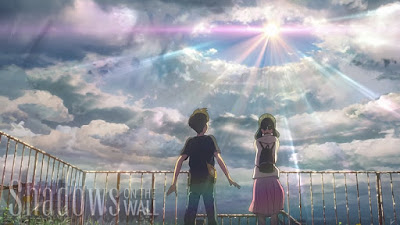 I watched a handful of films in the time between Christmas and New Year, some were catch-up awards-qualifying titles, others are coming to cinemas soon, some are both! The Japanese animated feature Weathering With You looks simply gorgeous (see above) and tells an imaginative story with style and emotion. Guy Ritchie's The Gentlemen stars Matthew McConaughey in a British crime comedy-drama. And the Russia's Oscar qualifier Beanpole is an unforgettable, twisted, powerful post-war odyssey. There were also these three: the first is an acclaimed and pointedly timely drama set in Paris, the second is Poland's provocative Oscar contender, the third is a masterpiece made by my all-time favourite filmmaker before I was born...

With an impressionistic, visceral filmmaking style, Nadav Lapid takes a fictionalised look at his own experiences moving away from his home country and adapting to a new culture. The narrative takes a series of random and sometimes absurd turns along the way, adding a range of textures to the film and its themes. It's strikingly well shot and edited, with intriguing angles and surprising twists in each scene. And it's anchored by a remarkably thoughtful performance from Tom Mercier, who brings a brave willingness to reveal the character inside and out.

Frustrated by his native country Israel, 20-ish Yoav (Mercier) esacapes after his military service to live in Paris. On his first night, literally everything he has brought with him is stolen. Neighbours Emile and Caroling (Dolmaire and Chevillotte) come to his rescue. As he befriends them, Yoav refuses to speak Hebrew, studying a French dictionary whenever he has a spare moment. Indeed, his only goal is to be French. He gets a job with a rather offbeat security group, which makes it even more difficult to simply reject his past. Yoav is angry at the ugliness he sees in Israeli society, but Emile reminds him that there is rot in every culture.

As Yoav bonds with Emile, Caroline and a Jewish colleague (Hayik), he reminisces about his life before France. Scenes are offbeat and unexpected, sometimes warmly involving or blackly comical, including a moment of sudden aggressive physicality. The character portrait and nature of his odyssey sometimes feel so broad that it's difficult to find the central idea, but then fleeing one culture for another is never going to be straightforward. The film is shot with style and honesty that hints at angles to the story Lapid deliberately struggles to explore, like identity or masculinity. Or perhaps he's just provoking his audience to find a way through their own stories.

From Poland, this boldly provocative drama takes on some enormous issues while telling the darkly personal tale of a young man grappling with who he is. The story is set in the deep-seated Catholic culture, tackling underlying repression, prejudice and, most notably, the appalling inability of religious people to forgive each other. Writer Mateusz Pacewicz  and director Jan Komasa refuse to pull any punches as the events unfold, and their actors play it beautifully.

The story centres on Daniel (Bielenia), a teen who gets parole just as his arch-nemesis Bogus (Czwartosz) arrives at the juvenile detention centre. Daniel had found solace there working alongside Father Tomasz (Simlat), so while heading to his new job in a sawmill, he's distracted by the village church, and especially Eliza (Rycembel), daughter of church administrator Lidia (Konieczna). Presenting himself as a priest, Daniel winds up taking over while the vicar (Wardejn) is away in hospital. And Daniel works himself into the heart of the community.

Tension emerges throughout this story, including dark hatred around the village relating to a fatal car crash a year earlier, ruthless control exerted by the sawmill owner (Lichota), and another ex-con (Zietek) who recognises Daniel and threatens to expose him. Balanced on this precipice, it's fascinating to watch Daniel's crisis of faith, beautifully played by the young Bielenia, barely concealing his emotions under layers of earthy bluster. It's clear to see that this is where Daniel belongs: even if he's an unqualified interloper, he's not a fraud, his work is genuine. And the filmmakers never take an easy route through his story, which means that it is packed with moments of joy, pain and even a few epiphanies.

Any excuse to rewatch Federico Fellini's masterpiece should be embraced, so it's great that the film continues to be restored/reissued. This is one of the most audacious movies ever made, packed with life, love, energy, wit and some bleak emotion. It's very long, sweeping the audience along on an episodic odyssey that combines Fellini's larger-than-life exuberance with his earthier realism. It's also quite possibly the coolest movie ever made.

The story centres on Marcello (Mastroianni), a journalist who travels with a pack of paparazzi, chasing famous starlets around Rome. Marcello seems to fall deeply in love with each of these glamorous women, so it's no wonder that his drama queen fiancee Emma (Furneaux) is at home contemplating suicide. But Marcello carries on flirting, dancing through each night with a sequence of gorgeous celebrities even as darker drama plays out around him, including a freaky night in the pouring rain following two children who say they can see the Madonna, a lovely but unsatisfying visit with his father (Ninchi), and a friend (Cuny) who loses it horrifically.

From the opening shot of a helicopter dangling a statue of Christ over a rooftop pool of bathing beauties, the film explodes with life. And everyone's loving it. These achingly cool people wear sunglasses indoors, seduce each other shamelessly and have moments of serious introspection ("My father's still a handsome man, isn't he?" Marcello muses). Classic imagery and moments abound, from Maddalena's (Aimee) vast Cadillac convertible to a frolic in a fountain with a red-hot movie star (Ekberg) to an outrageous party in an unoccupied villa ("And I'm unoccupied too," notes Maddalena). There's a range of astonishing settings, various types of music, and both old and young people being free and happily sexy.

Few filmmakers have ever had Fellini's powers of observation, spotting the tiniest telling movement within the grandest spectacle. So the film is a funny, crazy, wrenching collision of banter, bravado and humanity. It's the kind of movie that reminds us to howl at the moon from time to time, to remember that the good times go hand in hand with the bad ones and to take nothing for granted.

Screenings will be cranking up slowly this coming week as press offices return from the holidays. At the moment, I only have two in the diary: the British road movie The Runaways and the shorts compilation The Uncertain Kingdom. More are to come, surely.
Posted by Rich Cline at 11:49