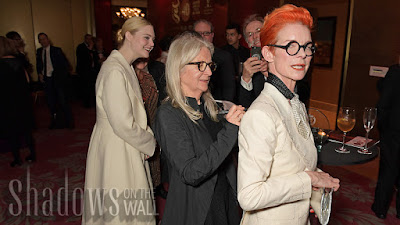 Being the 40th anniversary of our film awards, we decided to make our event a bit bigger this year, and indeed it felt extraordinary. Not only did we hand out three special awards to deserving winners who rarely get a spotlight, but the evening was punctuated with powerful moments that echoed the kinds of big themes movies should be tackling. As the chair of this event, I'm involved in each element of the night, so it often feels overwhelming in the weeks beforehand. Then I love sitting back and seeing how it all unfolds. And it was a gorgeous evening.

In the photo above, Elle Fanning watches as Sally Potter signs Sandy Powell's jacket. These were the first signatures on the garment, which Powell plans to wear to Bafta and Oscar before auctioning it to benefit the charity that is working to save Prospect Cottage,  the late filmmaker Derek Jarman's home in Dungeness: CLICK HERE FOR INFO. All photos are by Dave Benett, and you can see them larger by clicking on them. 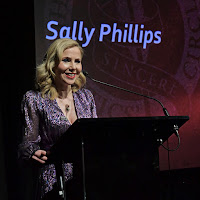 Our host for the evening was actor-writer Sally Phillips, who kicked things off with a riotously irreverent opening monologue and never let the pace flag. Her inventive, hilarious running commentary kept the mood light, intimate and celebratory. 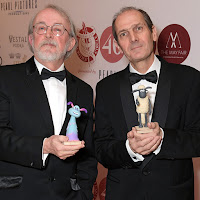 Our first special award of the evening was The London Critics' 40th Anniversary Award, which went to the animation powerhouse Aardman. Founders Peter Lord and David Sproxton were on hand, with a couple of pals, to accept the prize. 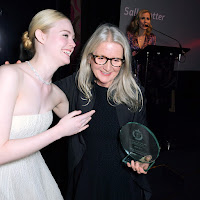 In the middle of the ceremony we gave our our second special honour, The Dilys Powell Award for Excellence in Film, which Elle Fanning came along to present to writer-director Sally Potter. Fanning's first film role was in Potter's Ginger & Rosa, and she also stars in her next project The Roads Not Taken, which had an exclusive clip in her introductory reel in advance of the film's world premiere next month in Berlin. 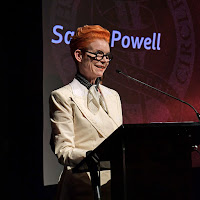 The third special prize came right at the end of the ceremony, as the gifted costume designer Sandy Powell also won The Dilys Powell Award for Excellence in Film. Producers Stephen Woolley and Elizabeth Karlsen presented the award to her on-stage. 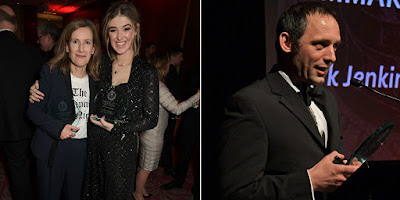 In between those, we handed out awards in our usual categories. The Souvenir (left) won two prizes: Joanna Hogg collected the award for British/Irish Film of the Year, while its star Honor Swinton Byrne won Young British/Irish Performer. And Mark Jenkin was on hand to win Breakthrough British/Irish Filmmaker for his fable Bait. 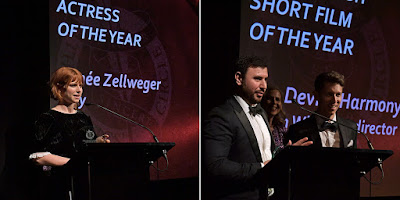 Jessie Buckley (nominated as British/Irish Actress) was on hand to collect Actress of the Year on behalf of her Judy costar Renee Zellweger (left). And producers Ramin Sabi and Anthony Toma accepted British/Irish Short Film of the Year for The Devil's Harmony, while the director was off winning a prize for the film at Sundance. Others who couldn't make it included Florence Pugh, who has attended multiple times before as a nominee and this year won British/Irish Actress; Celine Sciamma, whose Portrait of a Lady on Fire was named Foreign-Language Film of the Year; and Barbara Ling, who won Technical Achievement for her production design work on Once Upon a Time ... in America. And producer Emma Tillinger Koskoff was on hand to accept two awards on behalf of her films: Actor of the Year for Joaquin Phoenix in Joker and Supporting Actor of the Year for Joe Pesci in The Irishman. Others sent video messages... 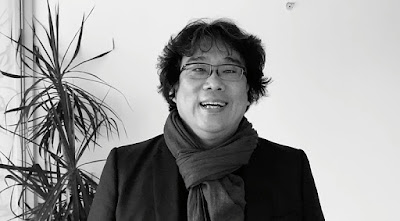 Bong Joon Ho sent two witty videos to accept both Director of the Year and Film of the Year for Parasite. "Awards are important," he said, "but even more so, to every single person who's watched the film, I hope they remember it in their hearts forever, like a parasite that never leaves your brain." 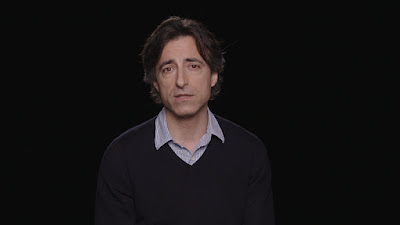 Noah Baumbach recorded a wry thank you as he won Screenwriter of the Year for Marriage Story. "This is an especially important award for me because both of my parents were film critics," he said. "And when I get a bad review it feels like my parents are criticising me." 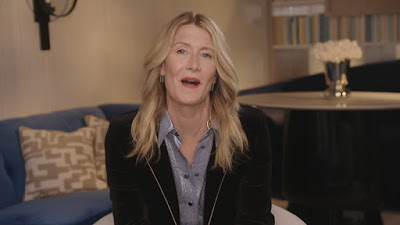 In accepting her Supporting Actress of the Year award for Marriage Story by video, Laura Dern said, "As a girl who on her 16th birthday turned to her actor parents and said, 'I want to be a real actor: for my birthday present, I want to go to Rada,'" and did, and learned so, so much in that beautiful city of yours, I'm very grateful."

And after an astonishing year of expertly immersive scene-stealing work in The Lighthouse, The King and High Life, Robert Pattinson won British/Irish Actor, noting, "I'm happy that I'm allowed to play crazy people in movies so that I don't have to be crazy in real life." Of course, his very active fan base immediately went nuts on Twitter. And one other award had a multiple acceptance... 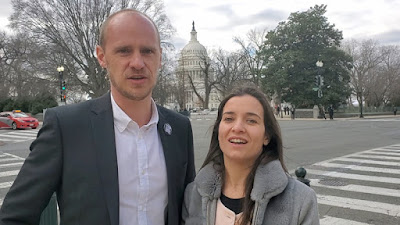 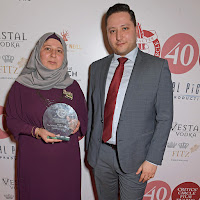 For Documentary of the Year, For Sama directors Edward Watts and Waad Al-Kateab sent a video explaining their absence: "We're in Washington trying to meet Congresspeople, spreading our message to stop bombing hospitals, trying to get people to care about Syria even though it's impeachment time!" Meanwhile, Waad's husband Hamza Al-Kateab, who is featured in the film, and their colleague Afraa Hashem took to the stage to deliver a powerful plea on behalf of the people of Syria. 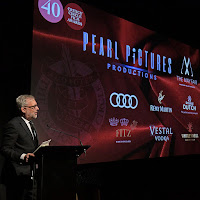 Part of my job was of course to thank the sponsors, because the entire event could never happen without them. New partners this year included our headline sponsor Pearl Pictures Productions, Fitz English sparkling wine, Whitney Neill Gin, Vestal Vodka and Double Dutch mixers, which joined our returning venue sponsor The May Fair, Remy Martin and our official car Audi.

And here are some more photos of our guests this year...