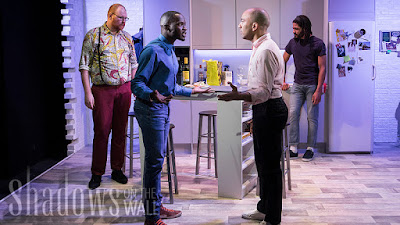 This revival of Jake Bruger's 2015 comedy-drama is beautifully staged in Above the Stag's newly revamped studio. A strong cast makes the most of the play's larger themes, exploring relationship issues from some intriguing angles. The way the bigger questions are raised is very clever, combining humour and pathos to challenge the audience to think about difficulties that are easy to identify with. So it's a little frustrating that in the final act the script takes a more simplistic, moralistic turn.

It opens with a strong monologue by Rafe (Byam), explaining that he and Pete (Blessie), his boyfriend of seven years, are in a conundrum: they met at university and have never dated anyone else. So perhaps they can each have one night of passion with their friend Michael (Spaine), to see what it's like to be with another man. Michael has an open relationship with his boyfriend Andrew (MacKinnon), which creates two hitches: Rafe and Pete don't want Michael to tell Andrew about this, and Andrew and Michael have a rule that they won't see mutual friends. What could possibly go wrong?

Scenes are smart and fizzy, staged on a kitchen set that shifts between the two couples' London flats (and a smoke-filled bar). Conversations meaningfully explore the complexities of relationships, including latent feelings of insecurity and the difficulties of maintaining open lines of communication. These offer plenty of texture that the audience can lean into, recognising personal experiences in the situations on-stage. Then just as things explode in a wonderfully messy dinner party, Bruger shifts the story in a rather direction, seemingly insisting that sex is everything in a relationship, so promises of monogamy are the only solution (even if they're unlikely).

The four actors adeptly bridge this awkward thematic path, each creating a vivid sense of his character's personality. Byam is likeable and needy, Blessie gives Pete a nice undercurrent of passive-aggression, and Spaine is sexy and intriguingly hapless. Meanwhile, MacKinnon gets the most complex role, stealing scenes with a wonderfully unnerving grin, zingy sarcasm and wrenching emotion. All four of these guys are sympathetic even when they deliberately cause each other pain, which means that the play is powerful and provocative, with moments of razor-sharp insight. But it could have been a knock-out if Bruger had more willingly embraced the ambiguity of the situation, the realisation that trouble in a relationship is never actually about sex.