Stage: Three in a bed 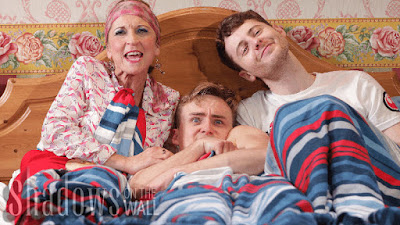 An old-style British bedroom farce, this light-hearted comedy is a surprisingly thin play for the ambitious team at Above the Stag. But even if there isn't much in the way of thematic interest or suggestive subtext, this is a well-produced show, with the usual far-above-average production values and a very lively cast. It's continually silly and sweet, although never actually sexy. And with a little more insight, the humour might have connected more forcefully.

It opens on that tired cliche: a young man wakes up naked in a strange bed and can't remember anything from the night before. Thomas (Fenne) is a lively, deeply repressed young guy who has no memory at all of Adam (Cahill), who has to fill in the details of where they met. Their chat is then interrupted by the arrival of Adam's hurricane-like mother Barbara (Daley), who brings breakfast and hops into bed with them. She's far too open about sexuality for the painfully shy Thomas, and Adam just rolls his eyes and smiles at the awkwardness. A week later, Thomas and Adam's relationship is developing quickly, and Thomas is getting used to Barbara's intrusiveness. Then Uncle Martin (Davies) turns up.

The show is a series of blackout scenes, each of which opens with a morning alarm. Amid a continual stream of wacky slapstick, there are occasional character revelations, such as Barbara blurting out details about her free-love youth, explaining her complete lack of inhibition. But the characters remain relatively cartoonish, likeable and entertaining without much grounding in real life. And the actors have a lot of fun with them. Fenne has the best role as the nervous, loose-limbed Thomas. It's easy to see why Cahill's smiley Adam would fall for him, and vice versa. Even if their romance progresses far too quickly. Davies is enjoyably bonkers as the hyperactive Martin, and Daley steals the show with a performance that's perfectly aimed far over the top.

Perhaps the most intriguing aspect to this show is the irrelevance of the sexuality. Quilter said he originally wrote the play about a gay couple, but changed it to a man and women to get it produced in 2012, and it became a big hit. By not making that the issue, the show can touch on issues of openness and honesty in relationships, family pressures and society's general fear of sex and sexuality. These things are all swirling around, even if the script never quite grapples with any of it. Instead, it's a bit of goofiness that might make you smile but, alas, will be hard to remember in the morning.