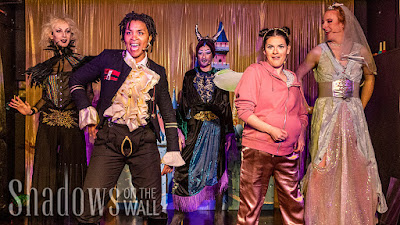 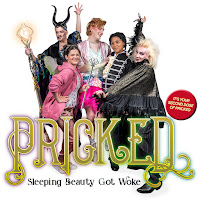 Shut down by the pandemic lockdown just a few days into its run in 2020, the riotously silly Pricked returns to the Royal Vauxall Tavern stage with a few timely story tweaks, swapped-out musical numbers and two new cast members. While LAST YEAR'S PRODUCTION felt fresh and absurdly funny, this year's show has a ramshackle charm that holds the attention based more on the sheer energy of the cast than anything else. And for me it had a whiff of deja vu that made it feel even more topical.

The tale of Sleeping Beauty gives the story its structure, although director Tim McArthur crafts it into a wonderfully deranged pub show that's definitely not for kids. Each scene is a performance, almost like an audition, as the characters introduce themselves and chat to the audience before performing a song or two, drawing on a range of musical theatre numbers and pop tunes. Updates for this year include bracingly current references to politicians and popular culture, plus an inspired, deliberately corny Abba reunion sequence.

It's still the story of Princess Aurora (Cartwright), who has been cursed by Maleffluent (Polland) to fall into a deep sleep on her 18th birthday. But Fairy Merryweather (Penrose) and a passing Prince (St Clair) intervene, plotting to rescue Aurora from Maleffluent and her conflicted sidekick Raven (Wood). None of these characters seem to have a clue what's going on around them, played amusingly by a gender-scrambled cast that continually questions the things written for them to do in the script. This includes getting impatient with the dream sequences and flashbacks that distract them along the way to the glorious holiday-themed wedding finale.

With boundless energy and considerable vocal skill, each performer dives into the wackiness, dropping in barbed asides and a continual stream of throwaway gags alongside the expected smut and innuendo. This means that quite a bit of dialog gets muffled in the mayhem, but the atmosphere is so bawdy and enjoyable that it never matters. And with lighter pandemic restrictions this year, the audience can more properly get involved with call-and-response moments, including lots of cheering, booing and singing along with the cast. 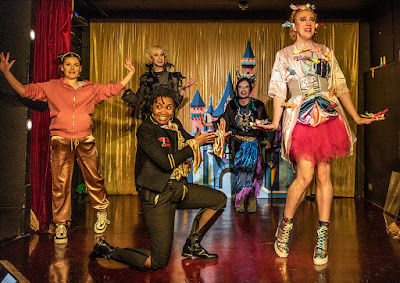