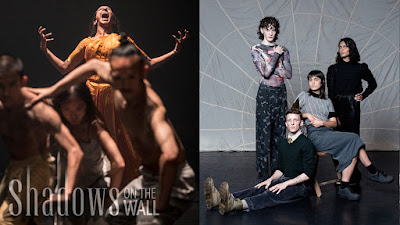 There's an intense mythological sensibility to this piece by Akram Kham, which features six dancers with distinct physicalities wrestling with their destiny on a set that feels like an epic arena. It's a vividly involving show that will mean different things to each audience member, evoking a wide range of emotions as the characters grapple with each other. The performances are staggering, blending a range of demanding movement together to often exhilarating effect.

The scene emerges from the darkness, with figures on an empty black stage surrounded by blocks of various sizes. This creates the sense that we're outside time and space, watching gods and goddesses attempting to make sense of their own identities and responsibilities. As the movements evolve, characters begin to emerge. Some people are clearly in control, driving the action and provoking responses. Others are more passive or nurturing. At the centre is a woman who takes on a Mother Earth presence, and the others cower before her.

Performed at full energy by the talented dancers, the movement is absolutely breathtaking, occasionally resolving into glorious tableaux that look like illustrations from an ancient book. And the soundscape is composed by Vincenzo Lamagna to blend music and voice in ways that cut straight into the gut. Created workshop-style, the piece mirrors the saga of the Sumerian hero Gilgamesh, who rescued a goddess, revolted against an overlord and defeated monstrous giants. Indeed, echoes of these legends are woven into the expressive choreography, which features flares of violence, compassion, lust and curiosity.

Like reading a poem or getting lost in an intricate painting, Outwitting the Devil is a piece that needs to wash over the audience without explanation. It's loaded with primal imagery that taps into the subconscious, revealing elements of humanity in strikingly unusual ways. It's also remarkable because of how difficult it is to describe in any real detail. Just see it if you get the chance. 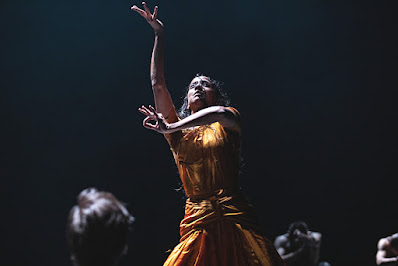 Magnus Westwell plays with images of masculinity in this gripping and seductively sweaty piece, which features three very fit male dancers with bare chests spinning together and apart in various beams of light. They emerge at the start as a single being, perhaps as the body, mind and spirit of a bird-like man with what becomes an astonishing wingspan. Then they separate and regroup in different formations, working both together and against each other in deliberate, physically demanding movements that are beautifully choreographed and performed. And it's their interaction that creates moving moments along the way.

Taking on a big theme, Vidya Patel uses an introductory film clip to comment on the issue of infanticide in South Asia, where boy babies are preferred over girls. Then four female dancers appear, pantomiming their daily activities to explore the feelings they are experiencing. As the performance continues, this evolves into increasingly complex choreography, emerging as a celebration of feminine energy, with a climactic view of women as goddesses. The narrative arc is vividly well crafted and played, mixing lyrical movement with clever lighting and sound to offer a powerful final kick.

There's an engaging loose-limbed feel to this piece, which Olive Hardy sets out as an improvised dance for two people with distinct physicalities. They travel around the stage in ways that feel aimless, only interacting tangentially; the kinetic Edwards uses sharp movements while the much taller Olivo remains rubbery. Each is in possession of some sort of cushion, which they wrestle with in a variety of ways, expressing emotion in unexpected places. It's physically impressive, a fascinating and unpredictable display of dancing skill. But thematically it feels rather opaque.

This Is Not a Penguin
concept-creation John-William Watson
performers Beth Emmerson, Heather Birley

Taking inspiration from cinema, John-William Watson maintains a wonderfully witty tone in this piece, which has an offbeat narrative that's set in a research station in Antarctica. There a scientist and her shadow pace in circles around a desk and chair, using clever repetition to establish patterns and then break them. They also drop in amusing dance moves, which are performed with deadpan humour and augmented by some very clever shifts in lighting, including superb moments of shadow play. The soundtrack features a terrific variety of audio clips, including snippets from Werner Herzog's wonderfully unhinged Antarctica documentary Encounters at the End of the World.