Stage: An offer you can't refuse 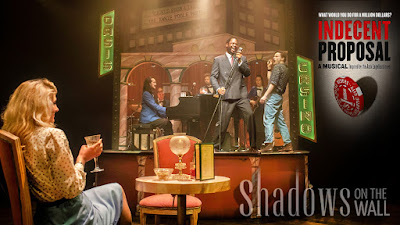 Indecent Proposal
book/lyrics Michael Conley
composer Dylan Schlosberg
dir Charlotte Westenra
with Norman Bowman, Lizzy Connolly, Ako Mitchell, Jacqueline Dankworth, Eve De Leon Allen, Connor Going, Olivia Thompson, George Readshaw, Liam McCloud
Southwark Playhouse • 23.Oct-27.Nov.21Adapted from the Jack Engelhard novel while carrying the memory of the 1993 Robert Redford movie, this rather odd musical never quite slots into gear. The story is compelling, there are some beautiful songs, and each performer finds moments of real resonance, but it's too dour and uneven to properly engage the audience. And it doesn't help that the writing never digs deep enough into the characters, while the direction makes it almost impossible to properly see the actors.

It's also a problem that the story is told from the wrong point of view, which surely this new production could have corrected. It centres on Jonny (Bowman), a struggling cabaret singer in Atlantic City happily living in poverty with his wife Rebecca (Connolly), who is working two jobs herself. Then they meet famed billionaire Larry (Mitchell), whose plan to restart his record label appeals to Jonny. But he instead offers the couple $1 million to spend the night with Rebecca, creating a moral dilemma that will have echoing repercussions.

Anna Kelsey's sets cleverly place the action in a rather down-at-heel casino bar, which inventively transforms into Jonny and Rebecca's dismal flat. The audience encircles the space, which is a problem whenever scenes are played on the floor, as the actors don't move around enough to keep faces in view. In most scenes, two thirds of the audience can only see the back of someone's head obscuring both themselves and the person they're talking to.

All but two songs play out on the stage as performance pieces, which is a nice touch even if it gets repetitive, and the odd dance of multiple microphone stands is distracting. Several numbers include soaring refrains that allow the actors to show their skills. Bowman's signature tune Next to Nothing is lovely (if a bit ubiquitous), and both Mitchell and Dankworth, as the sardonic hostess, have terrific songs of their own. Each performer is solid, maintaining a vivid sense of the character's inner life even when the underwritten book and loose directing style let them down. Particularly notable is Bowman's depiction of Jonny's wrestling match with his own masculinity. And Connolly conveys the brassy Rebecca's shifting emotions with skill.

But there are a couple of bigger problems with this show. First, it's told through Jonny's eyes, which is the wrong perspective. The moments when Rebecca takes centre stage are far more relevant and resonant, but she's sidelined in the climactic moments. The notable exception is the couple's big confrontation, but even this clash feels oddly inadequate. As a result, everything is oddly bleak right from the start, badly in need of a stronger infusion of Rebecca's optimism. This may add some realism to the story, but it makes it difficult for us to care where it goes.