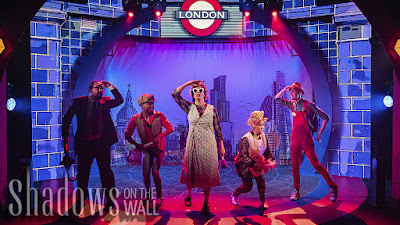 It seems impossible that writer Martin Hooper and writer-composer John Bradfield have missed a single gag in this fabulously naughty pantomime, which updates the legend of London's iconic 14th century mayor into the riotously queer present day. Everything about this adult-aimed production is firing on all cylinders, including the innuendo-stuffed dialog, catchy songs, ceaselessly up-for-it performances and superbly inventive sets. Often painfully funny, the show also carries a wonderful emotional kick.

It's the tale of hopeful young Dick (Peyton-Hill), who arrives in London not with a cat but a sassy Insta-star Frenchie named Ariana. But his fashion career is cut abruptly short. Then he meets street-smart Alex (Johnson), who is earning a crust selling generic Covid vaccines and believes that he is the Spirit of London. Alex's undertaker father Fitzwarren (Walwyn) is also taken by Dick, which explains why he's ignoring his wife Sarah (the great Baldwin, in his seventh Above the Stag panto). Meanwhile, Queen Rat (Biddington) is determined to be elected London's next mayor, chasing the action to a Mediterranean island where Fitzwarren's much livelier twin brother (also Walwyn) holds the key to everyone's fate.

Comical touches spring from every direction, including broad slapstick, witty wordplay, wacky character details and random asides. Almost every joke elicits a big laugh, while the songs are also packed with cleverly playful lyrics that are both ridiculous and instantly evocative, such as a celebration of going on holiday and ordering dinner from an illustrated menu. Of course, the title character's name is the main source of double entendre, accompanied by timely jabs at everything from politics to pop culture.

Each of the five cast members is on scene-stealing form, although it's Baldwin's impeccable timing and quick-witted improvisational skills that shine the brightest. As the show's dame, he's loveable and outrageously hilarious, constantly injecting deranged rhyming slang amid a wildly colourful parade of costumes. Biddington's villain adeptly channels rock-goddess mayhem as she creates constant chaos. And Walwyn's dual role is hugely amusing even before the brothers have their enormous confrontation, a genius combination of clever direction and sharp-witted acting. Which leaves the endearing Peyton-Hill and Johnson to infuse the show with heart and soul. And even more ribaldry.

This is a relentlessly rude show that's refreshingly unafraid to go for the smuttiest joke imaginable, maintaining an unusually high energy level from start to finish. It's inventive and unexpected, beautifully staged with eye-catching video-augmented sets that vividly create atmospheres from rat-infested sewers to a sun-drenched paradise. And it's the perfect tonic for pulling us out of our pandemic funk just in time for the holidays.
10.Nov.21
Posted by Rich Cline at 15:07