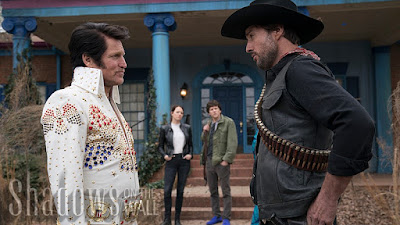 In in recovery mode following the London Film Festival, but that also means catching up with movies that are coming to normal cinemas. One of these is Zombieland: Double Tap, screened quite late to the critics just a few days before it opens. It's a lot of fun - a guilty pleasure sequel that reteams the original cast and adds some hilarious new characters. By contrast, the sequel Maleficent: Mistress of Evil has superb actors (both returning and new ones) but has such a terrible script that it would be unwatchable without Disney's amazing visual effects extravaganza.

Ken Loach is on fine ranting form with Sorry We Missed You, taking on zero-contract jobs with a terrific fresh-faced British cast. The Danish drama Sons of Denmark is a harrowing trawl into the life of a cop infiltrating Muslim fanatics and, more terrifyingly, nationalist racists. And the sunshiny drama The Third explores the life of a three-way relationship in Palm Springs, maintaining a balance of light romance and very dark drama. And there was also this doc, which I'd missed at LFF...

With a superb collection of archival footage, photos and audio recordings, filmmaker Richard Lowenstein presents a chronological narrative documentary about the INXS frontman. It's not a particularly flashy film, but it's elevated by the fact that it's narrated by Michael Hutchence himself using cleverly edited interview clips. And as it continues, it provides never-heard information that should end the rumours that have swirled since his death at age 37 in 1997.

After a childhood spent in Australia and Hong Kong, Hutchence set up INXS with the three Farriss brothers, Beers and Pengilly in 1977, and over the next decade rose to international fame. He is remembered by family and friends as a gentle soul, an artist who became another person in the spotlight. And being a celebrity, his rock god behaviour and romances with the likes of Kylie Minogue and Helena Christensen were top fodder for the paparazzi. What no one knows is that in 1992 he suffered a terrible brain injury that changed his personality, leaving him struggling to maintain his identity. Suddenly prone to outbursts of anger, his romance with Paula Yates was passionate and tempestuous.

There's a lot of amazing home movie footage woven in here, revealing both the youthful Hutchence and his own perspective behind-the-scenes on tour, on holidays, at family events and so on. This is so intimate that by the end it's easy to feel like the public image everyone knew was just a mask. In other words, the film demystifies him. It's beautifully assembled by Lowenstein, who lets Hutchence and his friends, family and colleagues recount his story in remarkable detail. And despite his final years of drug abuse and public misbehaviour, Hutchence emerges as a remarkably likeable man who never got the care he needed after his injury. So his suicide takes on a whole new meaning, and becomes even more tragic.

Coming up this next week are screenings of the James Cameron-produced Terminator: Dark Fate, Margot Robbie and Charlize Theron in Bombshell, Jonathan Pryce and Anthony Hopkins in The Two Popes, Ewan McGregor in Doctor Sleep, a new animated The Addams Family, the British drama Connect, the Ukrainian rom-com Just Sex Nothing Personal, and the Brazilian comedy-drama Cousins.
Posted by Rich Cline at 16:44