Geek alert! On the stage, on the page 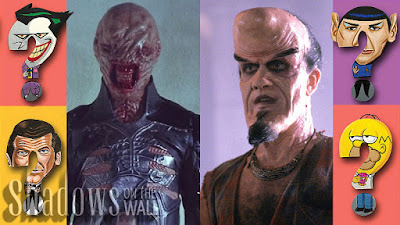 OK, I have many of the traits of a traditional movie geek, but I don't think I am one. Mainly because I don't have a crazy passion for any one thing. I have loved Star Wars since I saw the first movie at a cinema when it opened in 1977, but I don't have a set of collectibles. I have enjoyed Star Trek and The Twilight Zone, but I don't know a lot of trivia about them. I like genre movies, particularly horror, but I don't keep track of who's underneath the prostheses. So two events this past week challenged my geeky side in very different ways... 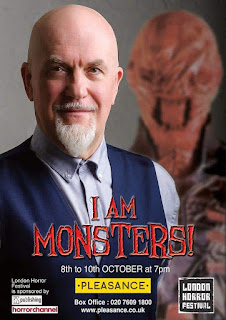 I Am Monsters!
by Nicholas Vince
8-10 October at the Pleasance, London

Nicholas Vince is a friend of Clive Barker who was invited to appear in Hellraiser (1987) as the iconic Catterer. He reprised the role in Hellbound: Hellraiser II (1988), then played Kinski in Nightbreed (1990). This makes him a proper celebrity at horror conventions. But this one-man show is something much more intriguing, as he traces his life with warm humour and gentle insight. He's had a few serious challenges, and he talks about these things with a relaxed honesty that's seriously engaging. Ironically considering the freaky-looking beings he inhabits on-screen, his main struggle as a young man was with facial reconstruction surgery. He also talks about the challenges of being openly gay in a world in which people don't like to talk about these things. Both of these issues involved dealing with bullies, but he talks about these things not as a survivor, but as someone who understands the pain so many people go through. He also shares quite a few amusing anecdotes about his experiences on film sets wearing the kind of makeup that makes it impossible to see or hear anything. Refreshingly, it's not an over-polished show, so it feels almost like he has invited you into his living room and is regaling you with stories that are witty, telling and involving. It's worth looking out for him as he takes his show on the road. 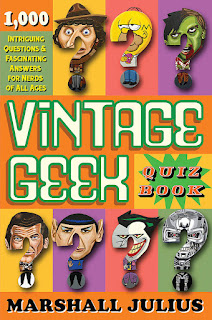 Marshall Julius is a fellow member of the London Critics' Circle, so I've known him for a few years, and I know how much work he has put into compiling this incredible book of geeky trivia. Set out as a quiz book, with 1,000 questions, it features 20 sections on things like Marvel, James Bond, Disney, Ray Harryhausen, Stephen King, Hanna-Barbera, George A Romero and yes, Star Wars, Star Trek and The Twilight Zone. It's a hefty volume, with knowing introductions and more tidbits of information than you ever thought could be gathered in one place. Some of the questions are pretty fiendish, especially the sections that cover things I know nothing about, like Doctor Who or Atari. But even if you don't know the answers, the book is a treasure trove of information. The main problem is that I will likely spend much too much time in this book - every time I pick it up, hours seem to tick past as if by magic. By the way, at the book launch event, there was a quiz with prizes, and I ended up facing questions from Steven Spielberg's filmography - Somehow I got all three right and won a collectible Harley Quinn figure. Here are those questions:

Answers are in white - highlight to see them: