London Film Fest: To the stars 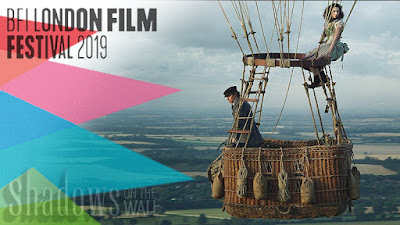 It was another rainy day as the 63rd BFI London Film Festival continues to run at venues around the city, including the special pop-up cinema on the Victoria Embankment. I attended my first public screening today - these are always nice because unlike press screenings the filmmakers are in attendance to introduce the film and chat with the audience. And I'm a big fan of Lauren Greenfield! The other comments here are just brief paragraphs, as I haven't had time to write up full reviews yet. They'll be coming along when I get some time. But at the halfway point in the festival I wonder if I'll ever have a spare moment again...

The Aeronauts
dir Tom Harper; with Eddie Redmayne, Felicity Jones 19/UK ***
Thrilling aerial sequences are the main reason to see this 19th century British story, which is based on real events. It also offers a picturesque on-screen reunion for the always watchable Eddie Redmayne and Felicity Jones. But it's written and directed with so much period movie sparkliness that there isn't much real life to it, and there's certainly no tension in the narrative. Still, as far as unambiguous prestige movies go, this one is amiable and gorgeous.

dir-scr Noah Baumbach; with Adam Driver, Scarlett Johansson 19/US ****.
An almost forensic exploration of the end of a marriage, this drama is of course infused with sadness but thankfully never turns mopey or maudlin. This is perhaps due to writer-director Noah Baumbach's attention to detail, which gives the film the honesty of a singular story. So while it may not be hugely resonant to everyone, these characters and the way they interact is powerfully involving. And it's anchored by a particularly strong role for Adam Driver.

And Then We Danced

dir-scr Levan Akin; with Levan Gelbakhiani, Bachi Valishvili 19/Geo 1h45 ****
There's a lovely mix of personal emotion and societal outrage in this sensitive Georgian coming-of-age drama. Swedish director Levan Akin keeps the camera close to his protagonist, seeing events tightly through his eyes as the world comes into a bit brighter focus for him. What it says about the empty, fearful machismo in Georgia is very harsh, but at its core this is an engaging celebration of artistic freedom. And a bold statement of support for Georgia's LGBTQ community.

dir-scr Jayro Bustamante; with Juan Pablo Olyslager, Diane Bathen 19/Gua 1h47 ****
Complex and very tough, this Guatemalan drama dives into an issue that is hugely contentious in this strongly religious culture, as a family refuses to accept homosexuality as anything other than a sin. Writer-director Jayro Bustamante presents this in a strikingly straightforward way that's deeply unnerving, subtly revealing the deeply hurtful hypocrisy and bigotry lurks under the surface of well-meaning people.

Documentarian Lauren Greenfield has an uncanny way of finding enormous resonance in specific stories. Here she uses a series of interviews with former First Lady Imelda Marcos to explore both the Philippines' tumultuous history and how the post-truth era has sparked a global rise of strong, right-wing leaders. Made over five wild years, the film presents the material with a wonderful sense of irony.

"Perception is real, and the truth is not," Imelda says flatly about her notorious years in public life, dogged by accusations of corruption as indeed she and her husband stole billions from the Filipino people. But instead of recognising the poverty their actions caused, she sees herself as her nation's mother, and she wants to take care of the world too. As credentials, she cites her close friendships with world leaders like Mao, Fidel, Gaddafi and Saddam. So she's grooming her children and grandchildren to take power as representatives and governors in the Philippines (she's a congresswoman), and her family secretly helped put Duterte in office.

Contradicting her tales of peace and benevolence, a range of interviewees recount firsthand stories of corruption, inequality, torture and murder during the Marcos regime. These things are being written out of the school curriculum at the moment, leaving children ignorant about what really happened, which of course doesn't bode well for the future. And the way she obscures facts with nice phrases is more than a little chilling. As is the way the Picasso and Michelangelo paintings mysteriously vanish from her walls.

Greenfield's cameras don't miss anything, and her photographer's eye makes sure it all looks spectacular. Without ever laying it on thickly, she is making a strong comment about why people blindly accept strongman leadership, ignoring the facts for lies that sound nicer. The world is heading into dangerous territory if people simply stop caring about the truth and accept any information that's put in front of them on Facebook. Oh, wait a minute: we're already there.